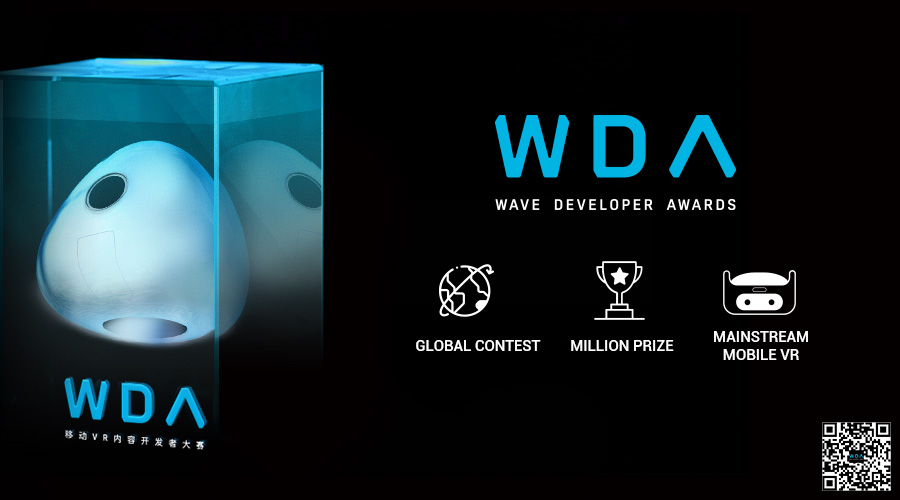 [WDA Submission – Postpone to Apr 10] Due to the unexpected coronavirus outbreak in China, most chinses spent most of the time “staying indoors” in past weeks. We understand that many developers fail to return their office to complete all development works. In order to allow developers more time to prepare, WAVE Developer Awards (WDA) will postpone the submission deadline to April 10. All winning quality standalone VR titles (including games, videos, and applications) in WDA , will receive prizes worth a total value of CNY 1 million.

Moreover, to increase the title’s reach and longevity, all WDA awarded entries will be published on Viveport automatically and included in Viveport Infinity content library, through which the quality titles are introduced to a new pool of consumers who are more active and curious to new content. Viveport Infinity is the world’s first unlimited VR subscription service launched in April this year. The service gives its subscribers unrestricted access to hundreds of VR apps, games and videos, allowing them to discover their favorite titles.

The VIVE WAVE platform is an open platform and toolset that enables Viveport to cover a wide range of standalone VR devices, allowing developers to distribute their standalone titles to HTC VIVE, iQIYI QIYU VR, Pico, DPVR, Skyworth VR, Idealens and Shadow VR. As 60% of China’s standalone VR market share comes from devices pre-installed with Viveport, 80% of them are 3DoF devices. Therefore, Viveport developers are offered an accessible and efficient avenue to the majority of China’s standalone VR device users. In addition, these 3DoF devices have expanded to the Asian-Pacific region in 2019, and will continually expand to the global market in 2020.

According to the VR/AR market report released by IDC, from 2020, the VR market of China will enter a stage of rapid growth with the launch of a 5G network. And by 2023, the global shipment of standalone VR devices is expected to reach 22.33 million units, which is 8 times that of 2019. By then, China will have a market share of 30% in the global VR industry.

With Viveport’s prominence in the standalone VR market and over CNY 1 million in prizes, also the demand for 3DoF and 6DoF titles over the next few years is expected to continuously grow, now is the best time to become a Viveport developer. Alvin Wang Graylin, the China Regional President at HTC, said, “As the 5G ramp-up continues, standalone VR experience will quickly benefit from the integration of 5G. We believe developers that invest in standalone today will reap the benefits as the standalone market explodes.”

More opportunities for VR developers in the coming 5G era

Standalone VR will experience exponential growth in the coming 5G era as some of VR’s most common pain points, will be addressed by 5G’s features such as high bandwidth and low latency. HTC has been poised for the ensuing 5G era. At present, HTC has partnered with a host of global operators, including domestic operators, with the aim to promote the application of 5G+VR by leveraging the brand-new market brought by 5G. Operators’ layout for 5G will bring more standalone and hybrid mobile VR devices to more consumers.

For more details about applying for WDA, please log into www.viveport.com/wda2020/en.